Set to deliver an intense and immersive gaming experience, Codemasters visceral military sandbox shooter Operation Flashpoint:  Dragon Rising has gone gold and will be available on October 6 for the Xbox 360 video game and entertainment system from Microsoft, PlayStation 3 computer entertainment system and PC.

With the new video, gamers can preview the most explosive moments taken from Operation Flashpoint:  Dragon Rising’s “Eagle Offense” mission, now available at www.flashpointgame.com.  The trailer reveals how a strategically vital airfield is turned into a bloody, chaotic battleground as a USMC force, accompanied by aerial support, assaults dug- in PLA positions.

The violence, ferocity and carnage of war is brought to life as troops on both sides attack in authentic formations, use cover realistically and engage in ranged, close-quarters and vehicular combat.  USMC forces fight through the airfield’s perimeter before infiltrating the Control Tower, eliminating enemy targets with rapid, ruthless aggression.  The Marines then assume defensive positions in readiness for the PLA counter-attack.  A Chinese WZ-10 attack helicopter is spectacularly blown out of the sky by a shoulder-launched surface to air missile.  The conflict culminates with PLA armor advancing across a battlefield surrounded by mortar fire and strewn with burning wreckage.  This flashpoint is still white hot…

Powered by the award-winning EGO Game Technology Engine, Operation Flashpoint:  Dragon Rising will set the standard for accessible, authentic war gaming. Preview the intensity of modern conflict in the new “Eagle Offense” mission video, now available at www.flashpointgame.com.  Gamers can also receive the latest updates on Operation Flashpoint:  Dragon Rising by signing up on Facebook at http://www.facebook.com/flashpointgame or follow developments straight from the studio on Twitter http://twitter.com/flashpointgame 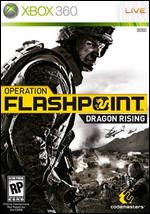