SEGA has finally made it official. Alpha Protocol has been delayed and is now scheduled to ship in Spring 2010.

The publisher changed the release date of the game last week from its October date to Spring 2010 on its website, but would not offer up any official comment at the time.

So what’s up with Alpha Protocol? As with most delays, the game is being given more development time.

"Since the inception of Alpha Protocol, SEGA has recognized the potential for the game to establish itself as an AAA title." says Masanao Maeda, President and COO, SEGA of America, Inc. "We’ve worked in conjunction with Obsidian Entertainment in making the decision to move Alpha Protocol’s ship date to spring 2010 to ensure that we have the best game possible at launch."

Feargus Urquhart, CEO of Obsidian Entertainment, also said the delay will help position the game to be a success.

"Alpha Protocol is a new take on the RPG genre and from day one the team has been working to make Alpha Protocol a truly unique game for players to experience." he said. "We’re very happy that SEGA has made the decision to hold back the shipment of the game in order to give it the best chance at becoming the publishing success that we at Obsidian and our partners at SEGA are striving for". 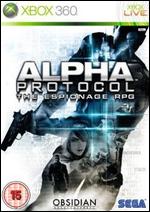