Square Enix has shipped 1.8 million copies of the highly anticipated Final Fantasy XIII and expects to sell two million during the game’s opening days on sale, according to Square president Yoichi Wada,

Final Fantasy’s release on Wednesday, which follows relatively soon after the PlayStation 3’s price reduction to JPY 29,980, is expected to boost PlayStation 3 sales in the country significantly.

In the most recent Japanese hardware chart Wii led with 135,898 units sold while PlayStation 3 held the second position with 75,086. 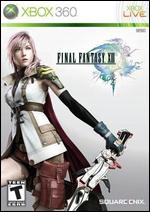