THQ Inc. announced the official soundtrack for MX vs. ATV Reflex, the latest edition to the multimillion unit-selling franchise, is now available for purchase and download at online retailers worldwide.  The soundtrack, helmed by renowned music industry veteran Raymond Herrera (Fear Factory, Arkaea) through his company, 3volution Productions, unites a powerful blend of original, hard hitting creations with the game’s cutting edge features, including intuitive, dual-stick control and real-time terrain deformation.  In addition, the soundtrack is compatible with most MP3 players (including with iPod), iTunes and Windows Media Player.

“The MX vs. ATV Reflex soundtrack is a perfect example of great synergy between the right music and a compelling gameplay experience,” said THQ Vice President of Global Brand Management Brian Coleman.  “The overall product is certain to have appeal with a widespread audience of game enthusiasts, off-road fans and mainstream consumers.”

“We wanted the soundtrack for MX vs. ATV Reflex to sound like a full-fledged album, and as a long-time fan of Motocross, it was great to help add the realism to this already amazing game and franchise,” said Herrera.  “All in all, it was a fun project to work on, and the end result sounds great – especially every time I play the game!”

The MX vs. ATV Reflex official soundtrack list is as follows: 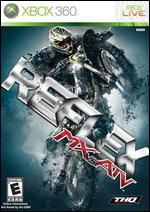