Publisher THQ announced its critically-acclaimed, mixed martial arts title, UFC 2009 Undisputed, has shipped more than 3.5 million copies worldwide since its release in May, 2009.

"We are excited that so many fans around the world have helped us achieve these impressive milestones in our debut year," said Dana White, President, UFC. "UFC 2009 Undisputed opened the door for us to further share the UFC brand with videogame and fight fans around the world, and we cannot wait to return this spring with the release of UFC Undisputed 2010 on May 25, 2010."

In North America, UFC 2009 Undisputed has reached ’Platinum Hits’ and ’Greatest Hits’ status, and will now be priced at $29.99 for both PlayStation 3 and Xbox 360. 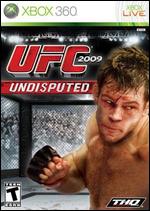