"Darksiders didn’t perform up to THQ’s expectations, likely selling less than 1 million units despite heavy marketing dollars, 2-3 years of development costs, and was also subject to discounting just 2 weeks after its release," Greenwald said (via Gamasutra).

Greenwald expects THQ to report sales of $347 million overall for its March quarter, with year over year growth affected by comparisons to last year’s release of Saints Row 2 and "weak sales and heavy discounting for WWE, MX vs. ATV Reflex, and numerous Wii titles".

"We’d also note that THQ will lack a Pixar title for the first time in seven years, as Pixar is developing Toy Story 3 internally," Greenwald said, adding that THQ relies on the Wii and DS market for 35-40 per cent of its sales and that market will be "much weaker" in 2010. 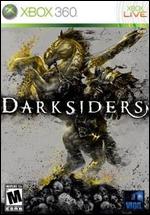