Content: MP Demo
Price: Free
Availability: Not available in Germany, India and Japan
Dash Text: Hunter. Survivor. Prey. Which will you be? Will you lock and load as a United States Colonial Marine? Fight for honour as the savage Predator? Or go in for the kill as the murderous Xenomorph? And will you be the hunter... or the prey? Demo features one map in Deathmatch multiplayer. Full game features eight maps, seven multiplayer modes and three single-player campaigns. Online connection required. 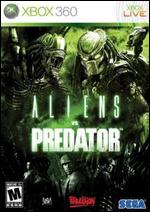