Lost Planet 2 producer Jun Takeuchi has said that Capcom had to cut a significant amount of content from the Xbox 360 version of the game due to size issues with its DVD format.

Speaking to the Japanese press about how development on the title was progressing, Takeuchi explained, “There wasn’t especially any big trouble. More than those kind of difficulties, the edited content was way too much and dealing with that was more difficult than anything.

"This time, truly, the content that was cut was significant and at the end, we had to wrestle with disc space."

Kotaku reports that Takeuchi expanded on how difficult it was to make those cuts, saying the development team was on "the verge of crying" as they cut the game to fit on the DVD disk.

Takeuchi did say, however, that the dropped content could appear later as DLC, which raises the question, will Capcom charge 360 consumers for it?

The co-op focused Lost Planet 2 will launch for PS3 and Xbox 360 on May 18 in North America and Europe, and on May 20 in Japan. 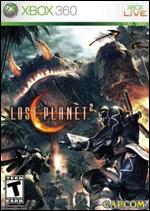