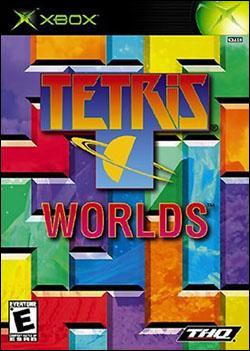 One of the most popular video games ever created, Tetris® has defined puzzle gaming for over a decade on every game system. Tetris is deceptively simple, yet, completely addictive. Small shapes called Tetraminoes fall from the top of the Playfield to the bottom. Players must rotate the Tetraminoes as they fall and fit them together to complete lines. When the player fills an entire line with blocks, that line is removed from the screen. If the player cannot complete lines, the blocks will eventually rise past the top of the screen and the game ends. Sound easy? Once you start, you can't stop.
Score: 64
Overall User Average: 6.43 / 10 (64.3%)
Gameplay User Average: 6.29 / 10
Graphics User Average: 5.57 / 10
Sound User Average: 6.29 / 10

Overall: I wasn't the one who rented this.. my mom wanted to see what the "new" tetris is like. She played it for an hour and quit.. all she can play is the traditional tetris. I played it for a while and couldn't get into it at all.
Gameplay: No matter what cool extra they can add to a game like this.. in the end all it is is falling blocks that you have to line up. Hardly avanced, hardly entertaining.
Graphics: Falling and twisting blocks. Little flashes when you get rid of a line.. nothing interesting at all in the visual departments. This would be the exact same game if it were done with Gameboy graphics.
Sound: Nothing going on with the sound either. I would just listen to my own music when I play.. because there is nothing in the game worth listening to.

Overall: Tetris is Tetris. What else can you say. Make sure you have a lot of CD's to add to the soundtrack for this one.
Gameplay: Same as always. They try to have a story mode but it is really stupid. They don't have the original Tetris, there is no scoring and it is very easy on the hardest level. If you just keep spinning the pieces, they never lock into place. It passes the time. It came free with my XBOX so I don't care!
Graphics: It never really changes does it. Same old Tetris. The backgrounds are okay but why would you be looking at backgrounds while playing?
Sound: Like I said. Make sure you have a good soundtrack because this is all techno crap. You can go through a lot of songs while playing too.
Suggestions: Have some sort of scoring when playing head to head. Make more levels and have the pieces come down faster than they do in Level 15. DOn't try to create a story. Come up with better puzzles. Look both ways before crossing the street. Don't sit too close to the TV.

Overall: This is the Xbox version of the classic game. It's got a ton of new gameplay modes is pretty close to capturing the original.
Gameplay: The gameplay is okay at the best. I haven't ever been able to find what I call "traditional Tetris". I (and my wife who I bought this for) were both very disappointed that it was missing.
Graphics: Hmm, well the graphics are okay at best. Good old blocks and lines. The backgrounds are well done, but don't effect the game at all.
Sound: The music is good. Nothing spectacular done here. The in-game sounds are pretty much the same as the old Nintendo versions.
Suggestions: Bring back the "traditional" gameplay. Online play.

Overall: You know this game before you buy it, so don't expect something else.
Gameplay: This is one of the few games that appeals to women (like my wife). She's not into the bloody destruction I seek from a game.
Graphics: blocks, in all colors
Sound: was there sound? I didn't notice.

Overall: I love puzzle games and I've had a copy of Tetris in some form for as long as I can remember. I'm always sad to see how little innovation has been made with this game over the years. Tetris Worlds adds a cutesy, tolerable story to the game and a handful of minor twists on the original theme, but not enough to warrant a purchase. You can download as fun versions for your PC for free.
Gameplay: The real appeal to this version is the Tetris variations, some of which are only mediocre, the rest a little better. Nothing to rave about, but definitely some extra fun and challenge to be had here. They really could've done a lot more though. I mean this is basically the exact same game as the Game Boy Advance version...
Graphics: How much can you do graphically with Tetris? As simple a game as this is, they actually could get very detailed with block designs, animations and backgrounds, but they didn't. It's colorful and cartoony. Sigh.
Sound: One cool thing about this game is you can use your own soundtracks. Hearing your own tunes instead of the game toons is a real godsend.
Suggestions: Geez... bombs, power-ups, new pieces, larger pits, gameplay innovation, puzzle mode, a story-line not geared to pre-teens. You're missing a large percentage of your core audience.