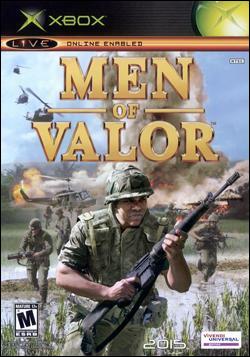 Whenever I think about the Vietnam War, some great films come instantly to mind. Who could forget Francis Ford Coppola?s Apocalypse Now or Stanley Kubrick?"

read more
Men of Valor: The Vietnam War is an historical action experience that portrays infantry combat during the Vietnam War. Combining the latest Unreal technology with the gameplay expertise of 2015, Men of Valor immerses the player in the humid jungles of Southeast Asia in the most controversial conflict of the modern era.

Men of Valor follows an American Marine through the early stages of the conflict in Vietnam to the Tet Offensive. Touching on the some of the most familiar scenes of the war as they exist in the popular imagination, the player guides his group of fellow soldiers through the hardship and confusion of the battlefield, bonding with them as they do their duty for their country with the heroism and valor typical of the American soldier but unsung during the turbulent times.
Score: 80
Overall User Average: 8.17 / 10 (80.3%)
Gameplay User Average: 7.83 / 10
Graphics User Average: 9.00 / 10
Sound User Average: 8.50 / 10

Overall: Men of Valor: The Vietnam War
follows an american soldier through one of the biggest wars of the 20th century.
you play this american soldier, and must fight your way through the boobie-trapped, vietcong packed jungles of vietnam.
but fear not, for you are not fighting solo... you are backed up by a convincingly life-like team of soldiers who fight along side you in an effort to put a stop to the vietcong.
overall
men of valor is a very good game,
it is a joy to play, bosts an intrigueing story and features impressive sound and graphics...
it is a worthy addition to the xbox's game selection.
Gameplay: gameplay sets out to be realistic and that goal has been achieved in many ways, such as
character interactions: one example can be seen early in the game when a fellow soldier asks you to get a football and throw it to him... and while this is a small touch it does add an element of realism, and gives anexample of the life that soldiers experienced off the battlefield.
other realistic touches include the RPG elements that have been incorperated into the game, interactive cutscreens etc... all these touches make for a varied, and realistic experience.
but, you might ask... 'what about the fighting' and youd be right to, as this is at heart an FPS war game... and a realistic one at that!
the battlefield was an incredibally tense place for the soldiers of vietnam, and the developers of MOV have tried to give an impression of that tension in the game... well they have succeeded... men of valors action is about as tense as it could be without experiencing war for yourself, (which trust me you dont want to experience) enemy fire comes from all directions, enemies wear camoflauge, and attack in large numbers, showing no mercy or restraint.
the developers of MOV have
achieved a good balance of realism and playabiltiy, and it is this mix that makes MOVs gameplay something special indeed.
Graphics: innitially i thought the games visuals seemed bland and i was quick to point out flaws and issues...
alas, not long after making my initial presumptions, I found my self in the jungle, where my first impressions were proved wrong and I took in the impressive sights that surrounded me,
trees with detailed leaves, light scattered uppon the jungle ground, and very nice particle effects gave a great sense of realism and made for a convincing jungle... this general graphical standard is maintained for much of the rest of the game... which is a good thing, however MOVs visuals arent without flaws...
some of these flaws include the generally flat textures, absence of bump mapping, and a slightly grainy/ blocky presentation- which could probably have been fixed by presenting the game in a higher resolution... also, while not a flaw in it's visuals the frame rate can sometimes be an issue... but even with it's few innevitable flaws MOVs visual style remains impressive, and it's visuals are among the better to be found on xbox.
Sound:
in a war game good audio can add an incredibal sense of tension and excitment... and that is exactly what happens in MOV, it's audio adds to the already incredibal sense of tension by adding convincing gun shot sounds, loud explosions, and realistic vehicle and aircraft noises.
this mix of audio is acompanied by some very good acting and all sounds seem to blend together nicely... although sometimes the audio might stutter confusingly for a second, it does not take away from the fact that MOVs realistic audio complements it's convincing gameplay very nicely.

Overall: Visually stunning, quite fun to play though frustrating and pure stupidity at times. Missions are good and the story flows nicely. pretty good fps!
Gameplay: Gameplay at times is magnificent, very realistic and everything seems to gel together quite well. At times though you will be left thinking 'what the' as they shoot you while ur behind a tree or when u cant shoot them but they can get you, or when you sit there for 20 minutes with ur scope set on one spot and u kill and wait for another guy to run out from the pushes, take the same position, nicely aligned to your scope. to stop this you need to move on, it just seems stupid! Another thing, AI is pretty retarded really, both enemy and allies, but allies especially, they get in the way of your shots, they look around (especially at you) in the middle of a battle and are just generally stupid. You cant seem to kill them yourself and at times i wish you could...

Besides those things which mite leave your controller feeling abused, its pretty fun gameplay
Graphics: Visually this game is mad, one of the best i've played yet (admittedly shorter than others xbox career). Explosions, smoke, fire, trees, shrubs, people its all pretty good. Gunfire needs a bit of work but thats the only fault i could point out.
Sound: Sound overall is quite good, tho the samples used when in action where your team-mates are yelling stuff tends to get very repetative, when you here 'get some' over and over you'll see what i mean. needs some expansion to suit different scenarios and more variety
Suggestions: Bit of work on gameplay needed, more brains for both AI, especially teammates is needed! Sound needs more variety and graphics are great but one can always do with more :p

Overall: This game has had high expectations and it doesn't disappoint. It doesn't do anything new with the FPS genre but it does everything extremely well. It's kind of like Medal of Honor in Vietnam except you have team-mates.
Gameplay: The game is basically go from Point A to Point B and kill everyone or protect someone, etc. I've really enjoyed the singleplayer campaign so fat because it portrays what Vietnam was like. The multiplayer on xbox live is amazing and very addicting. You have deathmatch, team deathmatch, recover the documents, etc. You can have a guest on live with you. You can also play through the singplayer with a friend.
Graphics: The environments look great in this game and the multiplayer maps are stunning.
Sound: Top notch sound. Except the voice acting is kind of cheesy.
Suggestions: Make the framerate better and make this a franchise like Medal of Honor!