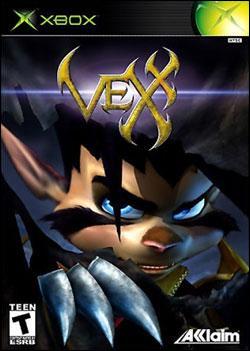 Our little friend Vexx is from the village Overwood, on the planet Astara. The Shadowraith Dark Yabu decended upon Vexx's village and reaked havoc & destruction. Vexx and his grandfather were defiant, and when Vexx could take no more he launched a futile attack on Dark Yabu."

Overall: I love adventure games and this one did not disappoint me so far. The only problem I have with the gameplay is the camera angle it is vey frustrating to really not know where to jump. The graphic are state of the art and crystal clear. But fix the camera please!!!!

Gameplay: Addicting and repititious finding everything is a real challenge which makes the gameplay worth the effort. Needs some extra firepower for me to keep playing or it will be my next trade in..
Graphics: Graphics are outstanding very well done. But there are more than graphics to make a game great so get with the program.
Sound: Sound is so important to an adventure game so I rate this low because repititious music and area sounds are just the norm subpar.. Sorry
Suggestions: Include music or let the user make it's own soundtrack for I usually like to use all the devices on my XBOX. All adventure game makers need to add music for I don't use sound if I can't use my own.

Overall: overall this is a great game for nearly anyone. If the camera wasn't so !&%$@#* awkward to use id give it an extra .5
Gameplay: its not too hard to control the little guy, he tends to run a little slow for my liking but apart from that its great
Graphics: the graphics are sweet. they have immense detail, not quite as good as halos but almost matching in some areas.
Sound: the sound aint to good. its seems to be a bit muffled at times, but maybe thts cause it's a third person game.
Suggestions: i have really enjoyed your game but you just gotta clear the sound and fix the awkward camera angles