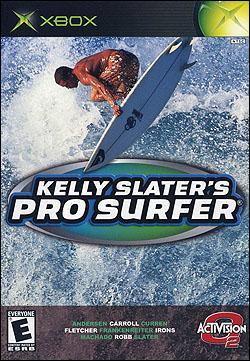 Hangin' Ten has never been so fun..."

Overall: Great game, they finally got a surfing game right, great fun, lots of tricks and THPS contols. Lots of great looking levels.
Gameplay: Great control, tons of courses, lots of boarders and cool cheat ones. Lots of great looking moves. Tons of fun.
Graphics: Looks awesome, all the beaches and waves look great, the boarders and tricks are done very well. I love the look of the water.
Sound: Really needed a custom-soundtrack, most of the songs were really boring some of them were allright though.
Suggestions: Great game, custom-soundtrack.

Overall: I was iching to get a look at this game and was definately impressed when I finally got my hands on it. I wanted to play it with an open mind to get the full effect.. and the effect is fantastic!
Gameplay: The feel of the game is great. The controls feel so natural it's scary. It's just as much fun 'playing' for a few minutes or several hours.
Very playable.
This is a very impressive game on all fronts.
If I can just work out how to jump over the freakin' pier...
Graphics: In a word... amazing. The waves look and feel SOOOO real. Every beach has a unique look and feel. How these guys can compute and render this in real time is beyond me.
Every wave is different just like the real thing. Great job!
Sound: The sound effects are everything you would expect. Haven't heard it in 5.1 yet but I can imagine. Would like to surf to my own tracks as in THPS3 etc.
Suggestions: Multiplayer via system link would be must in the next release.
Not been able to play you own soundtracks was disappointing. You would just assume a game of this level would have it.
Different types of boards, wind surfer, boggie, surfski and maybe even none would be a bit of fun.

Overall: What a sweet surprise! I thought I'd just hate this game, as I simply couln't see the point in mastering a bunch of tricks to repeat over and over again. I thought it would be boring, dumb and repetitive. Whoa! I was blown outta the water. This game has become one of the few I return to most regularly. The gameplay is challenging without being frustrating. The visuals are magnificent - especially the lighting and water. The music is typed perfectly to the attitude of surfers. Plus there's a 30 minute video of the featured surfers doin' their thing and playing the game.
Gameplay: This game offers those new to "trick"
games plenty of breathing room to train as you go along. And for the veteran synchronized button masher, it delivers a steady challenge of new tricks to master as you progress. The movie video lead-ins to the beaches heighten the interest and are quite amazing to watch, repeatedly, even without the game. There's plenty of variety in water, sky, character, and challenge elements to make each return to the game refreshing and worthwhile.

Graphics: Water looks fantastic. The light reflecting off the water is incredible. The water and lighting are soooo crucial for surf games and these guys did an excellent job. Best I've seen. The visuals in first person mode are simply astounding. I find the visuals gorgeous and soothing watch, without putting me to sleep or sending me into an epileptic seziure.
Sound: Finally, a soundtrack which doesn't provoke headaches. The vibes are mellow and driving, sustaining your interest without clobbering you over the head. Excellent job of matching sounds to genre. With the low-key, high quality music and the sounds of the ocean, it's easy to relax deeply while playing. Ask any professional, when you're in your groove, you've got to stay mellow and clear headed. The sounds here take you there.
Suggestions: Job very well done. I have other games which I think are well done and offer great gameplay, but this is the first which actually motivated me to write a review. Congrats. One suggestion, I would have preferred an even greater number of the music tracks you supplied as well as an option for custom soundtrack. ------ I don't know what's with that dude who dinked around for 10 minutes at Walmart. Man needs to chill, and not review games based on his inability to sustain his awareness for more than 2 minutes without his pre-conceived notions taking him to the land of of retarded turds.

Overall: This is the best Surfing Game ever! The waves and water simply look incredible! Finaly a game that does surfing right. Much better than Transworld Surf.
Gameplay: The new icon challenge mode is a lot of fun. Also, since no two waves are the same, you constantly have to adapt your style to each beach. The two player mode is a blast.
Graphics: The water and amospheric effects need to be seen to be believed! And the bonus levels are incredible. The presentation with the boat tour and Kelly Slater's monologues really enhance the game. I wish other games were more like that.
Sound: The soundtrack is really cool and mellow. Not at all the typical grunge music found in other extreme sports games. It really fits.
Suggestions: I wish we could paddle around more and check out the beautiful beach environments more, from up close.

Overall: It´s one of the greates surf game I´ve ever play, you'll feel like you are performing as those grates surfers. Sometimes it turns a little bit hard to ride the tube (as you are a rookie), but if you ever surf you´ll know it is no easy at all.
Gameplay: The tricks and manuvers are awsome! the surfride feels natural and it works very sharp with the vibration mode.
Graphics: Graphics and levels structure are excellet. The movies at the begining of each level are great! I´m looking forward to see the unlocked movies.
Sound: The best! considering that all the sports games has heavy rock, this game has the perfect combinations of great soul music.
Suggestions: The only suggestion is that if you´re going to play a movie for each level (each level is a beach), don´t show other beach to enhance the game, be as real as you can.