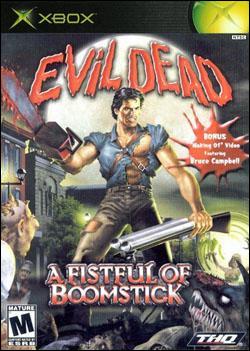 Now let?s get right into business?."

read more
Developed with the full support of creators Sam Raimi, Robert Tapert, and Bruce Campbell, Evil Dead: A Fistful of Boomstick allows players to assume the role of Ash, the chainsaw-armed hero from the Evil Dead trilogy. Players will fend off hordes of Deadites with several weapons including the shovel, gatling gun, shotgun and chainsaw. Massive game environments include all new Evil Dead locations as players attempt to save the town of Dearborn from the influence of the Necromonicon ex Mortis – the Book of the Dead. Evil Dead: A Fistful of Boomstick mixes the comedy and fun of a campy horror movie with intense combat missions for the most complete Evil Dead game yet.
Score: 63
Overall User Average: 6.75 / 10 (63.3%)
Gameplay User Average: 6.00 / 10
Graphics User Average: 5.75 / 10
Sound User Average: 7.00 / 10

Overall: This game for some people may not be alot of fun. I enjoyed it alot just because Im a fan of the old Evil Dead movies. That and the fact that Bruce Campbell is only the funniest best alo horror movie actor. Anyway the games plot twists and twists and everytime you think you got it beat you are wait deep in crap. This game unfortunately, once you beat it in your 10+ hours there is an arcade mode that only gives appeal to the game for a weenie bit longer. No doubt a precious spend of twenty smackaroos.
Gameplay: It was alot of fun even though the enemies were repetitively jumping out of nowhere time and again to kill you, but it just helped you learn there is more than one way to kill the undead. It was alot of toss and fetch. You did things for other people to further yourself in the game which is a nice puzzlish touch to it although it can get very old running through the neighborhood with a fleet of zombies chasing you just because you wanna find the biker with the silver spoon...LoL..Youd have had to play this to find that funny...
Graphics: The visuals were nice...They weren't realistic and all that awesomeness and what not, but then again zombies and time travel with the portal of hell has never been all in the likingness of reality now has it?
Visuals were satisfying..>!=)
Sound: I loved the games sound...In Bruce Campbell's voice there are alot of witty comments, they are fun to listen to, but you may get sick of one line repeating itself. Chainsaw, shotgun blasts....They were all nice sounds chigga chigga nad boom boom and all that. Environmental sounds were mediocre, but sprecial points for Bruce and his witty remarks.. >_
Suggestions: Always have Bruce's voice in his games not some cheap sound alike schmoe...And maybe variate the looks of citizens and enemies..

Some Vehicles would be nice.

But overall great game.. No matter what others say... ;)

Overall: I have never played an Evil Dead game. Someone conviced me to try it, and for $20 I couldn't refuse.

Just like any other movie based game I have tried, it is repetative, boring after 30 minutes or so, and sometimes just too difficult or confusing to figure out what the developers exactly want you to do.
Gameplay: Well it was fun at first, but became very repetative and boring after about 30 minutes.

Went online to get a walkthrough so I could concentrate on shooting/hacking the endless streams of deadites.

Very difficult to figure the puzzles out when they rarely give you a chance to stop and think.
Graphics: Bleh. Everything seems dark and the textures are reused for a lot of things (deadites for example). Graphics don't seem to take full advantage of the XBox.

The camera does not always seem to focus on where it should be, and seemed difficult to control.
Sound: I have surround sound, and other then the background music every boring sound repeats over and over (so repetative I don't even notice the sound anymore).

Overall: Why can't the Evil Dead series get a game that isn't a boring, stupid, waste of money? I'm a big fan of the movies but this game is an abomination to the name of Evil Dead. None of the things in this game really seem to bring any fun to it. No one is going to be hailing to this pile of crap.
Gameplay: The game is just plain boring. There's no way around it. I still can't figure out how this game manages to suck all the fun out of killing zombies and other creatures. And the puzzles(if you can really call them that) suck.
Graphics: It almost seems like the developers started to work on the graphics on some levels and then after a little while decided that it was good enough and went on to the next level. At this point they said," Hey look at that we're way ahead of time! Lets spend alot of time on the next level."
Then after that level they say." Look at the time. We worked way too much on the last level. We better get the next few done before lunch."
Some of the levels look fine while others actually cause me physical pain to look at.
Sound: The sound really isn't anything amazing, but I've got to give the game credit for using Bruce Cambell's voice. Besides that though it pretty much just sucks like everything else.
Suggestions: Come on guys! The license is better than alot of movie to game translations, and you've got zombies and demons to work with. How could these things suck so bad?

Overall: As a huge fan of the series, I am a little bias. That being said, I will try and be as un-bias as I can. It isn't anything ground breaking. You have various weapons, you collect various items to unlock the next stage of the game. The story line takes place after the 3rd movie, "Army of Darkness" and it fits into the series fairly well. The game is played in 3rd person view, with the ability to swing the camera around 360 degrees. It is ultra violent, and as gory as they come. Bruce Campbell did all the voice for the Ash character, so you can enjoy the ole favs, "You see this.....this.....is MY BOOM STICK!". Overall, a job well done by the devel staff, I would guess this will be a sleeper game. If you enjoy the movies at all, go get this one.
Gameplay: The game is played in 3rd person view. You can have two weapons active at a time (ie a left hand weapon & right hand weapon). As you progress thru the 1st level, you are introduced to the shotgun & shovel (right hand) and the chainsaw (left hand). These weapons can be used in combo attacks from some pretty great kills. My personal fav thus far is the impale with the chainsaw, hold them up, then blow them off with the shotgun. Classic. Controls are easy enough to master, and the game gives you tips thru-out on how to do various moves. The maps aren't as open as they could have been. The 1st level takes place in a city, but you can't go into any building you choose. You can only interact with the buildings / objects that are scripted for you to interact with. Still fun, but it would have been great to go into any place I want and interact with anything I want. Also, drivable vehicles go a long way, this game could have benefited from them greatly. You give gamers the ability to get in a car, drive around (run over deadites), then get back out, we will purchase the game. That being said, if you like "Hunter: The Reckoning", you might like this. Heck, at $20 bucks new, you can't really go wrong. If you enjoy the "Shoot it all & collect items" game, this one is for you.
Graphics: The Ash character looks great. Smooth animations, nice movement. The environments are acceptable. It's not Halo, but it fits the game. This isn't a game you pick up for graphic appeal. You purchase a game like this to chainsaw off a deadite leg, then blast him with the shotgun just to hear Ash chime in and say, "Oh look, there go your precious bodily fluids" Graphics are nice, they are acceptable. But you have to reserve higher scores for the Halos out there. Thus the score of 3.
Sound: Because Bruce is involved with the game, and lends his voice to it, Boomstick gets 4 right off the bat. But, they also managed to get the same feel of the deadite voices (ie, "I'll swallow your soul!"). As you are running around you can hear people begging for their life, and explosions and such. Really gave a feeling of chaos.
Suggestions: One word, 4 syllables. MUL-TI-PLAY-ER! When will devels learn? I know it doesn't really fit the whole lone wolf persona of Ash. But you would sell additional copies of the game, and increase the fun factor if you could run around with a buddy blasting the minions of evil. Take a look at "Toe Jam & Earl" for an example of how to do multiplayer right.