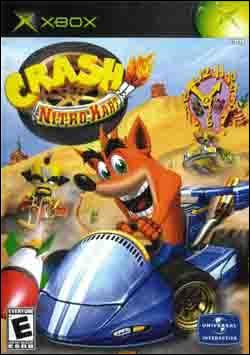 Fans of Crash Team Racing rejoice as Crash Bandicoot and friends are back for another run with Crash Nitro Kart. This time, Crash and friends along with Dr. Cortex and his goons are kidnapped by Emperor Velo for an Interstellar race."

read more
In Crash Nitro Kart, Crash will hit the track in his fastest-paced adventure yet! Kidnapped by the ruthless Emperor Velo and forced to race in his galactic coliseum, Crash must speed his way to victory in order to save Earth from destruction ... but it won't be easy, as he must compete against foes both old and new before a final showdown with Velo himself.
Score: 77
Overall User Average: 8.50 / 10 (76.7%)
Gameplay User Average: 9.00 / 10
Graphics User Average: 9.00 / 10
Sound User Average: 7.00 / 10

Overall: a very good multiplayer game... but not as great in single player... fun to play, and easy to get used to, looks lovely... and a you have a great choice of tracks!!
worth a purchase for great multiplayer fun... but if your looking for single player thrills, while not at all bad in that area, crash NC doesn't really offer them
Gameplay: the games simple, fun, arcade action style gameplay is really great... multiplayer offers tense and fun play that will last for hours, single player... while not bad at all, is not as great as it's multiplayer sibling.
Graphics: yes the textures arent super detailed... yes you can clearly see the polygons, and yes the xbox is capable of more...... but it really does look great!! visuals are just unreal, and look perfect for the style of game.
Sound: repetative music.... very similar engine noises... and characters constantly shouting ''guess who!!'' You can probably tell where i'm going. weve seen better audio (or should I say ''heard''?) & weve seen worse... it's an average sounding game
Suggestions: live play... better single play... better graphics

Overall: This game is really good. Graphics are great. The visuals are sweet. It is a lot better the the first Crash bandicoot racing game.
Gameplay: The gamplay is great. The carts are easy to control. The slide is really great for hairpin turns. Like i said the gamplay is great
Graphics: The visuals are great. It is easy to see things ahead of you. Like on the first Crash racing game you couldn't see the Nitros or the TNT boxes until u got really close to them. On this game you can see them from a distance.
Sound: The sound was pretty good but they could have made the sound better. The carts don't sound to well like a real one would.

Crash Nitro Kart Screenshots
We have added some new shots of Crash and friends getting their need for speed! EA don’t even say a word! :P
Crash is going racing!
Crash Bandicoot Revs Up at the Starting Line in New Racing Game: Crash Nitro Kart.