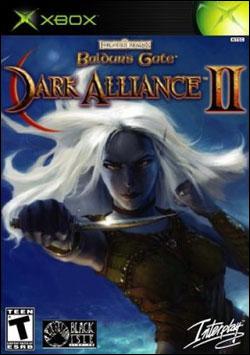 Sequels to things that are surprise hits: its usually not a very pretty story. Surprise hits usually mean one thing, and that is that someone lucked out when making it. Now and again a person will stumble on a great element without even realizing it which launches their game into the limelight surpassing all public expectations."

Overall: After playing Baldur's Gate I on PS2, the ending was great and just had me knawing myself waiting for the opportunity to play the second. And, well, I wasn't too impressed. Defintely some balancing issues in regards to character classes, the gem system is flawed to say the least, defintely not the sequel I was looking for. The graphics are also practically identical to the first, and in some regards I like the first one better, so you'd be better off with that or the Champs of Norrath series on PS2.
Gameplay: It's your typical hack-n-slash affair. The Necromancer is defintely cool looking having his spell book in one hand and his sword in the other. But before long, no matter what spells your jacking up, you want do as much damage as the Warrior/Barbarian class. Why? Once he/she gets the dual-wielding great weapons ability (meaning wielding two two-handed weapons one in each hand) he'll be doing 4 times as much damage as your most powerful spell or attack. On top of that, the Necro relies a lot on MP. The Barbarian can just continue to deal damage and not have to recharge his/her MP. As a result, when your playing multiplayer, unless you can get your friend to sit still and not kill enemies, the Necromancer is generally 3 levels behind him/her. Also, the combinations with the gems is cool like you get fire/ice, yellow fire when you have an earth and fire stone, but there's a point where you'll have a lot of gems and they serve no purpose because after you add 4 to your weapon, it does nothing. It still costs money to put'em on the weapon but after 4 gems there isn't a point, other than free money up. Also, you share money with your partner, which I absolutely hate. It's basically a rush to the shop menu and buy your cool weapon before your friend does.
Graphics: Looks the same if not worse than Baldur's Gate I which is just flat out pathetic. There's no reason the game should've looked the same.
Sound: Music is, decent, not as great as the first, but the voice acting is still strong but the scripting is just decent.
Suggestions: It shows Snowblind knows what their doing and you guys don't after this was made. champs of norrath just demolishes this game.

Overall: A really great RPG that will take you to his world in the first few hours of gameplay of it. If you haven't played the first one, doesn't matter cause this one is a pure hack-in-slash game like Diablo with a upgrade graphics and everything.
Gameplay: From the start you can choose from 5 playable characters, a barbarian, a rogue,a monk, a cleric and a necromancer. Each one has it's own abilities and characteristics. The story is about someone want to bring back the Onyx Tower and to unleash hell on earth once again. You must stop their plans before it's too late. There are tons of items to collect in this game. You can even upgrade your weapons by adding elements attack to damage more your ennemie.
Graphics: Visual is like the first one with a little update of some textures. You could see some shinning effects in the caves with water dripping. The most cool effects is the water but there are nothing new about cause is the dme type like the first game.
Sound: If there are a battle with boss, you could hear a little music but from the start to finish there are absolutely nothing. When you stab your weapons in the ennemies, the sound is just great.
Suggestions: Make a third installment totally in 3d graphics with more levels. Add uniques skills for each one.

Overall: overall this game is great , i like the getting money for new wepons it makes the game more interesting and willing to play more and more.
Gameplay: the gamplay is great, the levels are pretty big i like the fighting style and the story line makes sense .
Graphics: the graphics are rili good good animation (the water effects are awsome) when the play is talking the mouth moves wiht the words.
Sound: the sound in this game are incredabale you hear all the little noise like the swords hitting each other the guys saying stuff is clear or the sound the guys make when they die.
Suggestions: u should make another your doing a great job keep up the good work and i apreciate all the hours u guys put in making a game .

Overall: Its a good game. Purely a hack and slash adventure. I love the co-op mode. However, I am (was) a long time fan of the Baldur Gates PC series. This is not a RPG. KOTOR and Morrowind are much better. I was hoping that with the success of KOTOR that we would see a return to the glory day of BG. This did not happen. In its own right it is a decent game, I just cant give it high rating.
Gameplay: Too Easy. Too Short. Too repetative. However, it does pick up the pace in the extreme mode. I like the unlockable characters.
Graphics: Not much of an increase from BG DA. It is clean, and does not distract. Oeverall it is acceptable.
Sound: Ok. Personally, I have my xbox set up beside a TV, so I generally have no sound on the xbox while I watch a hockey game or other tv show..
Suggestions: Find you roots. Look back to Baldurs Gate, Icewind Dale and the rest of the PC games.

Overall: Well I was disappointed when I first played this game. I was a big fan of the first, and thought this game needed better skills/attributes for the chars. I didn't know that later in the game each char gets different skills to choose from. So I thought the spells and stuff were lacking, but it gets better :) It's a bit longer than the first, has a couple improvments too. I'm happy with this game, after beating it and seeing what it has to offer. At first glance I wasn't though. If you liked the first then buy this one too, I like it better. Plus more replay value with 5 diff chars compared to 3 in the first. Good game to play with 1 other person, that's the most fun.
Gameplay: Pretty much the same as the first, which is good. They kept the basic principles keeping true to the game. A hack and slash with some spells and character development too.
Graphics: I am happy with the graphics, same as the first though, as it was done on the same graphics engine.
Sound: No complaints here. Nothing special, but doesn't hurt it either. I think it fits the game. Boxes breaking or weapons clashing etc.
Suggestions: The secret/hidden chars should be start at level 0 not lvl 16. It's fun to build up the chars and choose the skills. Lvl 16 boo. The item creation system wasn't worth using. If u upgrade an item u might find a better one 5 mins later anyways. There goes your rune stones, gems, and money. Only 1 person to buy items form the whole game. He never had anything good to sell either. Online multiplayer would've been cool.

Overall: This game is incredibly fun and live up to the franchise. If you havent played the first one i would suggest you do, otherwise you wont understand the story line too much.
Gameplay: This game plays very much like the first one. except this time you have more characters to choose. there is a cool glitch in duplicatin items, so you can be walking around with 3,000,000 gold in your pocket. its real smooth gameplay and tons of fun.
Graphics: The graphics are polished a little more than the first. not too much of a difference. but they are still beautiful. this game is not lacking in this department.
Sound: While hacking and slashing enemys you dont really pay too much attention to the sound, maybe thats because its fits perfectly. the music is good and the sounds of your weapons are excellent.
Suggestions: Just make the next one with up to four players.

Overall: Baldurs Gate: Dark Alliance II is smooth rpg that many can become inthralled in. There are many different ways you can advance your character and customize while still keeping it simple. There is also a wide variety of characters to fight that each have weaknesses and strengths. Which keeps it interesting and fun.
Gameplay: The overall gameplay is simple and sweet. But it can leave you with a sense that something is missing.
Graphics: The graphics on dark alliance II are much better then the first. You can very easily distinguish one monster from another although some of them are the same person.
Sound: The sound effects and the dialogue are quite impresive this time around and you will find it is hard to play on mute.
Suggestions: Need's longer storyline and smarter AI. For instance the end boss, I was able to kill him in a few seconds because he kept jerking back every time i hit him with a poision arrow so he almost never got a chance to hit me.