The three mid-90s games are intimately related. Sega AM2 brought Fighting Vipers to arcades a year after Virtua Fighter 2 in 1995. Fighting Vipers featured similar controls, moves, and animations to its more renowned predecessor. It had its own shticks, though, introducing breakable armor along with walls to cage the fighters in. In turn Sonic the Fighters plays similarly to Fighting Vipers, unsurprising since it was the eventual result of a Sega progammer coding in Sonic and Tails to that game. In 1996 Sega released Fighters Megamix, a Saturn crossover which contained characters from all three games. 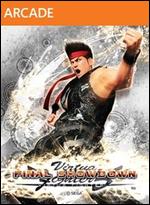