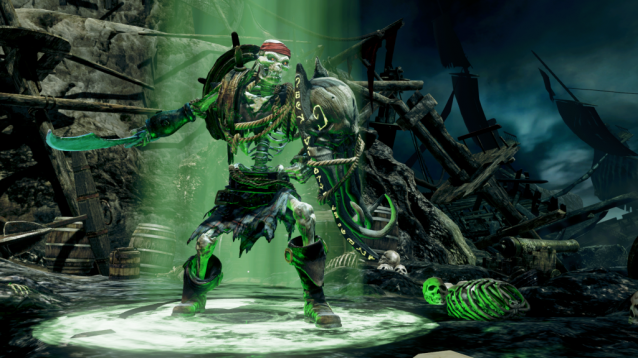 Killer Instinct‘s swashbuckling skeleton has joined the fray: Spinal will become available today for owners of the Ultra Edition and Combo Breaker Pack bundles (Note: he will automatically download for owners of those bundles.)

If you’re already comfortable with Jago, Orchid, or one of the other KI characters already available, why should you give Spinal a spin? We asked Producer Torin Rettig to list some of Spinal’s best maneuvers:

Also, he looks incredibly cool – see him in action in the video above… and be sure to watch all the way to the end. 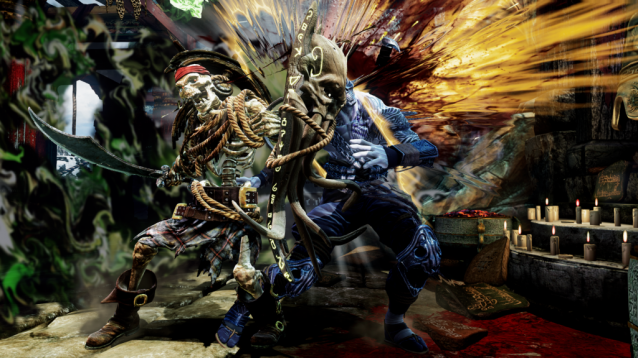 (But) before jumping into the fray with Spinal, be sure to check out Xbox Wire’s exclusive interview with the “Killer Instinct” development team, including the Godfather of the “Killer Instinct” series Ken Lobb and Creative Director Adam Isgreen, to learn useful tips and tricks about how to master Spinal’s unique skillset and dominate the competition!

Xbox Wire: What was the inspiration for your re-design of Spinal?

Ken Lobb: The inspiration for the original is pretty clear; it was Jason and the Argonauts. Who doesn’t want to be a bad-ass pirate skeleton? Being undead and supernatural he could logically do some things which we wanted the character to do, like teleport, absorb projectiles, and more.

For the new Spinal, we knew that we needed to respect those aspects, and the fans; but also make him a more viable character in the new system. So thinking what absorb could mean is a world with an Instinct meter, power meter, and within the rush/grapple/zoning triangle. I hope that fans of the original are as happy with the outcome as I am. He really is insanely cool. From the crazed cackle and the fireball storm to his evil with a capital E meter-draining moves, he is both familiar and super unique at the same time.

Adam Isgreen: Visually, we wanted to move Spinal forward from the original games, which was basically a Harryhausen skeleton with a long bandanna on his head. We felt it was time for Spinal to put on some “clothes” and embrace his obsession with piracy. We’re very pleased with the end result that mixes his pirating origins with some otherworldly elements. It’ll be fun to explore what that connection implies to the overall story in future "KI" work.

Play-wise, Spinal was a tough discussion internally and with Double Helix, because he was always a “weird” character. Many players didn’t understand how to play him effectively, but those that did loved him for his tricky and underdog play style. For us, the tricky play style was important for us to maintain in the new version. While we always strive to keep our characters accessible, Spinal leans more toward the technical end of the spectrum where Glacius and Sadira reside. Spinal’s moves are a lot more visually relatable than Glacius and Sadira’s… he does less insanely crazy things, but they’re just harder to use effectively than, say, Jago’s repertoire.

Xbox Wire: What are Spinal’s strengths and weaknesses?

Ken Lobb: All strengths? OK, I see him as all of the characters in the game very well-rounded. He has a strong run that his game centers on, and all these annoying tactics around draining your meter… this HURTS if you don’t know how to deal with it. Another “strength” he has my new favorite stage and music. Wow.

Spinal makes other characters play differently, and I think that’s his biggest strength. The fact he can absorb special attacks and projectiles, teleport, and drain meter (both instinct and shadow) makes him a formidable opponent.  His weaknesses are that he’s momentum-based, especially with his drains. If you can’t keep up the pressure, you will easily be beaten by others.

Xbox Wire: What advice would you offer to beginners who are using Spinal for the first time?

Adam Isgreen: One of Spinal’s key strengths is his dash/run. When you decide that you want to play Spinal effectively, learning to use run a lot to start mixups is key to the mindgame loop that makes him tricky.  Also, you have to learn how to conserve and use skulls effectively. These give you such large advantages with all your special moves, so while spamming overhead fireballs can be fun certainly, you always have to think of what you give up when you aren’t using your skulls strategically.  Finally, don’t be afraid to use your shadow skull for an ender – Spinal is all about trading off damage for drain, as that pays him back as the fight goes on.

Xbox Wire: Who does Spinal match up best against? Worst?

Adam Isgreen: Spinal is such a kinetic character that he’s fun to watch in any matchup – he’s sliding, diving, teleporting, running… I find him one of the most visually intense characters we’ve created so far.  Currently, he fares very well against Jago and Glacius, because he forces them into a different move game because of his ability to absorb Jago’s windkicks and teleport past a lot of Glacius’ ground-based attacks and pokes. I think right now, Sabrewulf and Thunder are the best bet to take him down – they’re fast enough to stay close to him

Ken Lobb: I love “Killer Instinct” 1 and 2 to this day. I’m so happy to have been involved with those games. But I also see the new KI as my new favorite in the series. It’s somewhat about the added modern aspects to the game, but it’s also the fact that we have a far more rounded experience. Turtles, infinites, real 3D, it’s all there, and up to that’s what fighting games have evolved into. I am proud to say that this is the best Spinal yet. Damn, he is so cool. We have been dying to talk about him, his move set, and background. Well, now he’s out. Please play and tell us what you think.

Adam Isgreen: It’s rare that anyone gets a chance to build a fighting game these days, and to bring back one like “Killer Instinct” in such a fresh and compelling manner has been a real privilege and a lot of fun. The Microsoft and Double Helix teams have worked very hard to make this game happen, and we thank all the fans that have supported us so far. Stay tuned! We don’t plan on stopping anytime soon.