We’re taking a different approach this week to answer some things from the forums that have been popping up lately.

First, thanks for the passion you all have for KI. We too share that passion and see the potential for what KI can be. It was a risk taking a 20-year dormant fighting game and bringing it back. We had many hurdles to overcome throughout its development, but the game has endured, thanks largely to the die-hard fans like you and our great development partners. Now we’re here almost a year later, and KI is still growing.

The monthly content model is massively different to the way that most fighting games (and really most console games) are built. And yes, as some of you have suggested, those of you who have bought into S2 already are in many ways "beta testing" the game as it gets more and more content and features over the course of the season; characters may have some flaws; polish may not be perfect; new modes are NYI (not yet in); there could be bugs we didn’t catch pre-release. We know this.

However by rolling content out monthly, along with the bumps we get to do something no other game ever has time post-launch to do, and that’s adjust rapidly based on feedback. You can see this in the 2.1 UI that Kraig showed last week, which contained many adjustments driven directly by feedback from this forum’s posts after Season 2’s launch.

It’s not a perfect system (yet) but every release we’re learning more of what will and won’t work with this kind of approach to content release and we will continue to refine it, and that includes how we interact with the community (you) during development.

These days, it’s very hard to satisfy anyone that’s a hardcore fan with any single bit of information, as it immediately makes them ask for more – there’s many examples of it throughout this forum in previous textual streams – but you know what? Screw it. Here’s a lot of info: 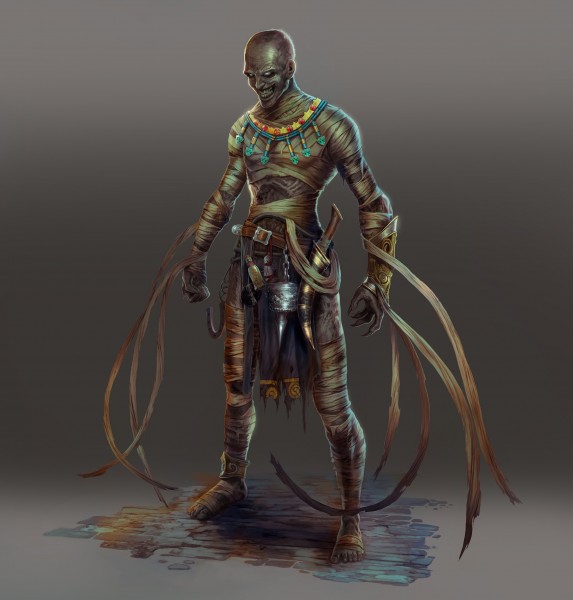 Here’s a part of his backstory:

Babylon, 559 BC: Kan-Ra is named Vizier, head advisor to the throne.

Over his years of study in this position, he becomes fascinated with the King’s enigmatic royal guard – a living bronze statue – and the magic that keeps it alive. From all of Kan-Ra’s cautious attempts to observe and study the creature, he deduces that its power source could theoretically keep it alive forever. The thought of being able to study and learn until the end of time enthralls Kan-Ra and feeds his obsession for knowledge.

Scholarly research in the royal libraries into past wonders and lost arts of magic fuels his ambition; Kan-Ra feels that as the smartest person in Babylon only he is qualified to rule. He seduces the King’s wife using a charm spell and begins setting in motion a plan to take the throne by using the Queen as his assassin.

Lacking the power to control the spell effectively, it wears off prematurely. The Queen, thinking herself simply coming to her senses after being seduced by Kan-Ra, is overwhelmed by guilt, killing herself and leaving a note detailing her and Kan-Ra’s betrayal.

Enraged, the King has Kan-Ra hunted down and captured by his royal guard, who brings a bloodied a broken Kan-Ra before the throne. The King summons his most powerful sorcerers and curses Kan-Ra with a withering rot- a painful dark magic curse that disintegrates flesh and organs slowly… painfully. Writhing in agony, rotting a bit more every day, Kan-Ra is exiled, he and his ambition doomed to wither away into nothingness.

In exile Kan-Ra uses what little knowledge he has gained of magic to slow the rot. While the King assumes him dead, Kan-Ra’s intellect is focused on reversing the rot so that he can have his revenge. He tracks down sorcerers and occultists versed in dark magic, learning what he can. Unable to slow his rot further, he instead places upon himself other curses that work to offset the rot. He seeks out magical artifacts and talismans to ease the pains and ailments these layers of curses cause him, carrying them on him in ever-growing number; a magical balancing act of curses and boons at play throughout his being.

We will also have a live stream on trailer day (next Friday!) to show the character being played and walk everyone through his moveset.

Starting in January, we’re going to try some things a bit differently with how we talk about upcoming characters, fuelled directly by your feedback here on the forums. Expect each character’s name, concept art, story, and gameplay preview streams to appear before their launch, not right around it.  We may show a character in stream before the trailer launches, even. We’re going to play it by ear and see what has the most impact, so each month may be a bit different in how things are released. Bottom line: More insight into KI’s development, earlier.

Why not starting in December? Because the December character will be released well before Christmas, so that month will be accelerated somewhat anyway.

Additionally, Kraig and I will start tag-teaming the textual streams going forwards. We’ll alternate weeks talking about characters and gameplay vs. UI, modes, and all other things KI.