Hand of Fate 2 Coming to Xbox One on November 7th

Hand of Fate 2 challenges players to overcome trials built from collectible cards, handed out by the Dealer. Each card will test players with hack-and-slash combat, dangerous locales to explore, tense minigames, or Dungeons & Dragons-style decisions. A new map-based overworld allows players to discover and unlock those challenges in entirely new ways.

The sequel also introduces a variety of new features, including weapon types and associated fighting styles, cards that can provide a powerful boost, different victory conditions for combat and the dealer’s card game, as well as all-new bosses, enemy types, and storylines.

The Dealer, Hand of Fate’s magical antagonist, returns seeking vengeance following his defeat in the first title. Under the destructive influence of Hand of Fate’s original hero, a xenophobic tyrant has crowned himself emperor, banned all magic and exiled the non-human races. Hand of Fate 2’s new hero must master the Game of Life and Death to exact the Dealer’s revenge and topple the oppressive empire.

You can check out the game in action below: 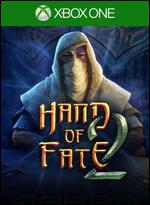