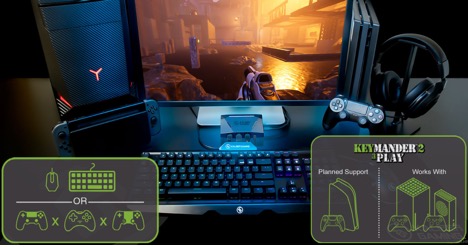 New KeyMander 2 3Play Multi Switch Allows Sharing of a Keyboard and Mouse Between a PC and Two Consoles.

The KeyMander 2 and KeyMander 2 3Play allow for total customization to increase convenience and enhance precision gameplay, allowing for desktop-style keyboard and mouse play, as well as cross-console controller support on all current and upcoming Xbox Series X | S game titles. The KeyMander 2 3Play combines controller adapter technology with a peripheral sharing switch to bring the unmatched speed and precision of a keyboard and mouse to up to (3) three game consoles or (2) two consoles plus a PC. The device allows gamers to quickly switch between PC and game consoles via hotkey switching, eliminating the need to disconnect or reconnect any wiring between controllers and devices.

In addition to giving gamers a choice of their favorite method of control, be it desktop-style or their preferred console handset, KeyMander 2 products can be fine tuned to match user preferences with the mobile K2 app (iOS, Android). The tuning apps allow users to create custom gaming profiles featuring key mapping, mouse sensitivity, macro functions and more, all on-the-fly from a smartphone or tablet. The KeyMander 2 Forum expands upon the customization made available by the K2 app, allowing users to share and download gaming profiles, share tips and tricks, and get the latest information about the KeyMander 2.

Cross-console support on the KeyMander 2 allows for sharing of controllers between the new Microsoft Xbox Series X|S consoles, Microsoft Xbox One, Nintendo Switch, PlayStation 4 (i.e.: users can use Xbox X controllers on a PS4, etc.). Planned support for the new Sony DualSense controller is planned for future firmware updates. 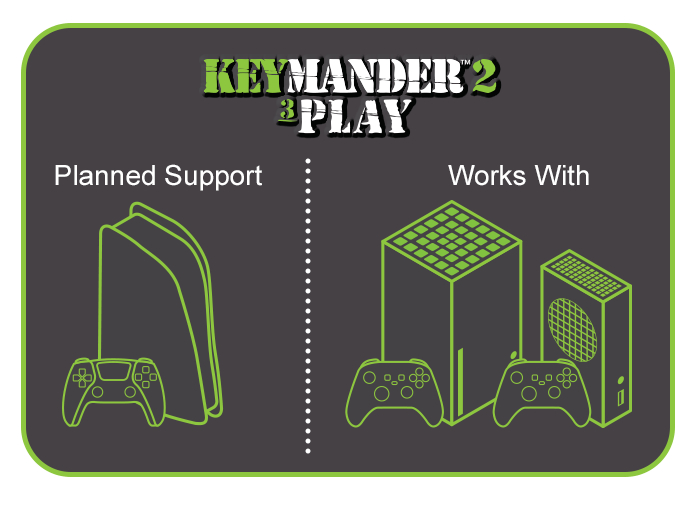 The KeyMander 2 is available now for $99.95 at BestBuy.com, Amazon.com, B&H Photo and Video, MicroCenter, and NewEgg, while the KeyMander 2 3Play will be available this holiday season in the U.S. at select retailers for $119.95 and will roll out globally in Q1 2021.

You can read our original KeyMander 2 review HERE.