It’s Time to Be Whacked!

REDMOND, Wash. — Feb. 6, 2002 — Microsoft Game Studios today announced the development of "Whacked!™," the latest addition to the award-winning lineup of titles for the Microsoft® Xbox™ video game system. Developed by Presto Studios Inc., “Whacked!” will feature fast and furious combat in which eight demented contestants are pitted against each other in the world’s most irreverent and dangerous game show. When contestants take the stage, all hell breaks loose as free-for-all combat ensues. Contestants must use power-ups and zany weapons such as giant staplers and rubber ducky grenades to flatten their opponents and win a grand prize that’s out of this world. “Whacked!” is slated for release in fall 2002.

"Whacked!" includes the following key features: Bizarre, yet appealing characters. Players meet a variety of contestants, each with their own quirky personality and unique traits, including Otto, the emaciated, narcoleptic dude who lets his recliner do all the work; and Lucy, whose sinfully attractive body is surpassed only by her cunning ability to use it.

Multiple gameplay modes. Players can choose from Combat Mode, in which players fight each other in a race to collect resources, Chicken mode, which pits a player against a horde of man-eating chickens in a quest to stay alive, or other modes including King of the Hill, Grab ‘n’ Run, Fragfest and Dodgeball.

Highly detailed levels. Gamers can do battle in an artic pipeline or clash under a Christmas tree — there are more than a dozen intense levels (including the kitchen sink) where players can destroy their opponents.

Founded in San Diego, Calif., in 1991, Presto Studios Inc. is a cutting-edge entertainment software development company best known for its engaging, photo-realistic games, including “Myst III: Exile” and the "Journeyman Project" series of time-travel adventures. More information on Presto can be found at http://www.presto.com/.
Source: http://www.xbox.com/ 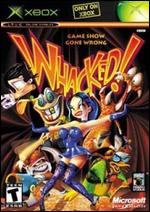