Sega’s expansion to online lizard-basher Phantasy Star Universe, Ambition of the Illuminus is now available for purchase and download on Xbox Live Marketplace.

Sega says the PS2 and PC versions of the expansion will be released on January 11, 2008.

The 1600 Microsoft Point download (about 14 quid) adds both single-player and online content to the much-underrated action-RPG, including new missions and levels including the Granigs Mines and the Ruins of Old Rozenom City, which sounds quite moody. The download weighs in at 1.92GB. 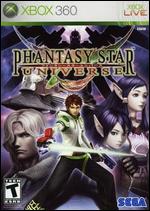