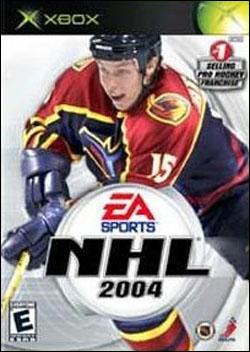 Overall: Hockey. Its pretty much the same thing every year from EA. I traded in ESPN Hockey for this title, and I was pleasantly surpised. For a single player hockey game, I think this one may be the best of the 03/04 season.
Gameplay: EA has done some fine work in modeling a hockey game. Players actually setup in the zone, and attack the net properly. Defensemen are in position to hold the puck in the zone. Stupid passes are intercepted. It is difficult to break out if you don't follow to the pattern. This game really feels like hockey. Its not perfect though, as is usual with EA, the game speed is way to fast. Some things that occur on the ice are physically impossible (like shooting the puck from the blue line, and the puck rebounds of the boards and goes all the way down to the opposite end of the ice). The imperfections can be easily overlooked.
Graphics: Not a bad game to look at. The on ice graphics are nicely done. I can't put my finger on it, but there is something about the player animations that make this game unique. It is not so cartoonish, but certainly doesn't look real. I like it.
Sound: decent music is included with this years title. I think EA gets hockey and hockey fans, because the music fits the title. The game sounds though are crappy as usual. Announcers are mostly lousy, and the on-ice sounds are non existent. But I expected nothing more, so I am not disappointed
Suggestions: I know it will never happen, but I'll keep asking, please, please, please can we have XBox LIVE support?

Overall: Amazing game except for one important thing... The gameplay! This is by far the greatest hockey game ever other than the absolutely horrid gameplay! Amazing Franchise mode, great graphics, good commentary, you edit team captains, and much more. But no gameplay!!!
Gameplay: HORRIBLE!!! Even with the "Bruise Control" feature which is suppose to make for awesome hitting, it's virtually imposible to hit someone unless you're perfectly lined up with them. The gameplay is just frustrating and it's just too annoying to play. The only thing good about the gameplay was the fights.
Graphics: Awesome. The players, stadiums, crowd, etc all look amazing. This was one of the best parts of the game. Also, when you pick your team captains, they actually show up on the jersey, unlike ESPN Hockey.
Sound: Good soundtrack and very good play by play commentary, a big step up from last year. The sound is also one of the key highlights for this game.
Suggestions: Please improve on the Horrid gameplay! NHL 2003's gameplay was great, so how can the screw up 2004's gameplay so badly?

Overall: NHL2k4 is absolutly the most outstanding version of EA Sport NHL games to date. Still not perfect but well on it's way. Dynasty mode is interesting but far from user friendly. But after some practice and research can make for an enjoyable game experiance.
Gameplay: Gameplay in this game has improved 100% over NHL 2003 with smoother gameplay and the added ability to play behind the net. However I feel that it is much harder to get the big monster hits that you could get in NHL 2003.
Graphics: The graphics in NHL 2004 are much sleaker than those of it's predecesers. Every year the players and their movement get more realistic but the developers don't seem to do anything with the crowds. Well I'm pleased to see some improvement in this department with 2K4 but still much work needs to be done.
Sound: The sound is very realistic. The fx from the gameplay are awesome however I find that the commentary is much more dry than the sometimes comedic commentary in NHL 2003. Great soundtrack on the game as well for stoppages of play which also adds to the realism.
Suggestions: Keep working at it. You say "if it's in the game, it's in the game!" in your ads but with NHL 2004 it isn't really true. I would suggest when improving a game in certain areas it isn't recomended to take away from other areas. Overall a very enjoyable gaming experience.

Overall: This game keeps the franchise pretty strong... but it is NOT that good. Good new franchise options and better control over players but there are lots of little things that just !&%$@#* me off.
Gameplay: The gameplay is good. But i think that the goalie having the puck go over his shoulder is just lame... it like trickles over. BOO!
Graphics: nice visuals. Everything looks really good and th eplayers look just like there real life others. GOOD STUFF
Sound: WELL! if i had 5.1 i am sure it would rule. BUT WHATEVER! its a hockey game so it'll do. Good job here i guess.
Suggestions: BETTER GOALIES! AND GET ONLINE!

Overall: Overall good game. Skating animations are by far the best of any game. Teammate and computer AI needs to be tightened. There are still too many offsides and the teammate AI seems very weak compared to the computer. The graphics are good. The fighting is the best of any hockey game. One annoyance is that the settings for line changing (manual, automatic, none) has to be set every single game. Another annoyance is not being able to find out how long a player is injured for in the franchise mode. This was standard on every past EA hockey game that I can think of and now they just forgot about it???
Gameplay: Gameplay is very similar to past EA hockey games. The hitting is a Jekyl and Hyde show. It has flashes of brilliance but for the most part is way too hard. The new board pinning is a nice addition. The passing game is good but the AI needs to be improved so that players will attempt to stay on-side but still catch the pass. For some reason the defencemen seem to be the fist men in on every rush -- WHY? Also the breakouts are poorly done. Computer controlled players always skate backwards to catch a pass in their own zone instead of breaking out which is wrong. The players also seem to crash into the boards as soon as they catch a pass a lot. The shooting is the best of any game. It makes you feel like you really did pick the top corner on the breakaway. The manual dekes work quite well. Line changing and strategy changing is easy to execute. EA is still missing a skills competition or a backyard rink mode but the other modes work well. Overall very good gameplay.
Graphics: Great visuals. Much better than ESPN Hockey. I don't know how anyone can give ESPN a better rating. Skating, shooting, and hitting animations in ESPN hockey aren't even close to EA's. The dark jerseys at home is a new idea brought in by the NHL for the 2003-2004 season. Perhaps the retard who wrote the previous review should do some investagting before blasting EA. Best visuals of any game.
Sound: The sounds in the game are very well done. Hitting the post, dumping the puck off the glass, and many other effects are done superbly. The announcing is okay. It's as good as ESPN but could be better. At least they don't make retarded comments like "He really hit him with that great shoulder check" like ESPN a hundred times a game. What announcer says that in real life?
Suggestions: Tighten up the AI to reduce the number of offsides. Improve the breakout. Make the forwards be the first men in on forechecks not the defencemen. Make the hitting easier. The bruise control is a good idea but was not implemented well. Add a skills mode or something to that effect. Make it so you can create players while already in the franchise mode and also so you can see how long a player is going to be injured for so you know if you should make a roster change or not.

Overall: Indeed much imroved over nhl 2003, but
still a hell of a lot more work needed.
Worthy of a purchase only once u have
played what else is on offer. e.g. NHL
Rivals 2004, Sega NHL 2k4 and the new
Hitz 2004 game.
Gameplay: Great controls once set up to how i
ussually had them. many pros and cons
about this title. ill start with the pro's, feels
like u really do aim the puck sometimes,
take control of any nhl team u like then
take them through DYNASTY mode
where you are the general manager of
the team. You control how much tickets
are, who is traded and released, edit the
lines and much more. If you so decide to
create your own team u create the arena
they lay in aswell, although this has very
limited features it still adds some
exitement to the game. Crowd look great!
Now the cons, WHERE IS THE BIG
HITS? hitting in this game is so hard it
will frustrate you. aiming your right
thumbstick at a player is harder than u
think and the results are poor when u do
get them. Frame rate drops ever so
slightly every now and then taking the
smoothness away from the game it once
had in its 2002 version. Home and away
jerseys are wrong. Meaning if u play a
home game with the rangers instead of
having the white jersey on ytou have the
blue one on, and when playing away u
wear the home jersey. how could EA
make such a flaw? the hitting will be
sorley missed by previous fans.
Graphics: Perfect, utterly stunning graphics with
everything being perfect except the faces
which need a little work. this games
visuals will blow you away, easily the
best looking hockey game ever made, so
far....
Sound: Awesome crowd and comentating,
however loading your own music would
be cool. especially after you flick a puck
past a goalie and the crowd roar. it would
be nice to have some of your own music
play instead of a very unsuited "The
Ataris" or "GOB" song play. sounds great
in Dolby Digital when the puck flys
around the boards, hearing it actually go
around you is cool.
Suggestions: Focus on fixing that framerate back to
how it was in NHL 2002. Make the hits
BIGGER!!! learn which jerseys are home
and away before making another game.

Markus Naslund On The Cover Of NHL 2005
EA announced today that Markus Naslund, from the Vancouver Canucks, will be on the cover of EA Sports’ NHL 2005.
Another Athlete Sells Out to EA
I’m just kidding, I know athletes need to eat too. Dany Heatley of the Atlanta Thrashers became EA’s NHL 2004 cover boy.