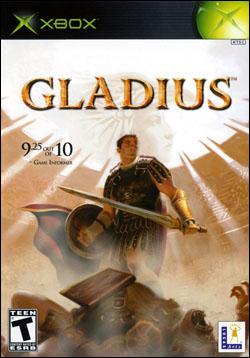 Gladius propels you into the ancient games of a history long gone, the quest to develop your school into an elite fighting force on the path to the championships. Follow the saga of Ursala the daughter of a Barbarian King from the land of Nordagh; or Valens, the son of Imperia?s greatest gladiator."

Overall: First 5.0!!!!!!!!!!!!!!!!!!!! I love this game. I've always like this tyle of play where you choose the moves then perform them, but it is much more interactive then that.
Gameplay: You start a school of gladiators and you build and grow through four lands the try and get to the high tournaments. It's not as simple as it sounds. In each game, there can be 2-4 teams eaither killing eachother, playing king-of-the-hill, control the hotspots, do more damage than the other people, destroy the monument, so on and so forth. There's a lot of gladiators and enemies, so a lot of replay value. AND CO-OP!!!!!!!
Graphics: Graphics were nothing special, prbably the only low of the game. Sometimes the archer would pull back a bow but the string wouldn't go back, some minor details like that.
Sound: Sound is good. You can listen to it for a awhile with out getting sick of it. The voice acting is good too. No custom soundtrack(suprise suprise).
Suggestions: Sequel with more lands and maybe make your own gladiator option. Other than that, keep up the good work!!!!

Overall: Maybe I didn't give this game enough time, but I also have other titles to play (Prince of Persia, GTA, etc.) While Lucasarts does great with their Star Wars titles, this one could have been done better by someone else. While the concept draws you in with the Gladiator type play and micromanagement school operations, it just didn't do it for me.
Gameplay: The controls are simple to grasp, but screen after screen of dialouge, league, tourneys, items, customizations...blah, blah, bah, enough already. While I'm sure that some out there who enjoy such detailed and meticulous gameplay, action fans and those who want to focus on just a hand full of glads, as oppose to a full (20-30 at most) school.
Graphics: The characters look nice, even on the small scale, and the character designs are unique as you get into it a bit more, but the world and some arenas are kinda dull. The cutscenes look nice though, and the story does bring you in.
Sound: The grunts, groans, moans, attacks, etc. are done ok, but could have been a bit more varied. The music is very 'Gladiator' esqe but soon fades in importance as you progress or go through the mundane taks of school and item management. Some spell affects sound nice, and the voices usually are done well in Lucasarts titles.
Suggestions: I dunno, make a Star Wars game maybe similar to this kind of game idea, or maybe make it a decision to have a big school with little story intertwined with the characters, or make it so you can pick three glads to go through a story with and fully develop them both in stats and plot choices.

Overall: some of these other reviews were all kind of long, so ill make a short one for all of you people out there that dont like to read much, ok? ok. Gladius is one of the finest turn-based RPG available for any console, with an Exquisite battle system and pleasent story taking the control of prince Urlan who just happens to run a gladiator school.
Gameplay: choosing students to fight with you in battle, obtaining numoris amounts of items and defeating many different enemys is only a few quality asspects that make Gladius, truly, a masterpiece in the making. But also with its battle system, much like a golfing-game meter, has the smoothest of feelings... So, unfortunatrly, As of right now I cant think of any more good/big adjectives to use in describing this game so i will end it here. But keep in mind that even with its in-depth stradegy, gladius can certanly apeal to many more different people than you would only think.
Graphics: While gladius may not have the best graphics you would ever hope to see on the xbox, it certainly is the better looking one out of the other versions(ps2 and gamecube).
Sound: It manages to have some fairly decent tunes, but, sadly some repetive battle music. But with all that set aside, the sounds from the clashing swords and just all of the overal effects are great.

Overall: When I initially looked into this game, I just figured it would be your standard "Sub Par" product that has been associated with Lucas Arts over the past decade. But I was looking for a new RPG that I could invest a large amount of time into. To say the least, after learning the depth of this game, I was surprised...
Gameplay: The gameplay was probably what took the longest to really become accustomed too. Being that the core of the game is turn based combat, where consecutively hitting buttons is more important than your overall strategy in battles. But I was mistaken, after putting about 15 hours of gameplay in, you suddenly realize the interaction of the different classes of warriors, and how you can use their strengths and weaknesses to your best advantage. The gameplay is intricate, but not to the point where it gets annoying.
Graphics: Anytime you are dealing with a turn based game, graphics will suffer. However this game is not just watching your "gladiators" move, attack and then stop. The game designers went out of their way to add a sense of "realism" and "personallity" to the characters that was a breath of fresh air. Overall the graphics are good, but there are some times where things look pretty cheesy too.
Sound: The sound in this game was also surprising too me. The soundtrack for the game has kind of a Braveheart or Lord of the Rings feel. Unlike other games that I have played, I can actually leave the game sound on for hours at a time without getting completely annoyed by the same redundant sounds and music. The characters have dialogues and they sound good while doing it. I'm impressed...
Suggestions: I've always enjoyed RPG's that are a little more open ended, such as Morrowind. Now while trying to compare Gladius to Morrowind is just the same as comparing an apple and an orange, I like having a certain amount of freedom in how I go about completing the game. Beyond a less script like progression through the game, a less cheesy storyline would help too. But hey, I might just be getting a little too picky!

Overall: This has to be one of the best RPG's I have ever played. You are able to customize your character, change weapons, defense, all with a very clean and easy to learn presentation. Of course this is not a game for kids, this is for mature turn based RPG fans, people who are willing to devote time on learning Gladius' intricacies. I read many reviews of this title, including IGN's and I must admit most of them gave a lower rating to this title than what it deserves. Great effort, kudos Lucas Arts!!!!
Gameplay: Simply put, the best turn based RPG elements I have played. The fact that it is not random, that you have control on the success of the hits is superb
Graphics: In game graphics could easily get a 9.5, the cutscenes are a mixed bag, the animated still are great, the rest, not so good.
Sound: In game sound is great, music is fair. Could have been much better. Ambient sound during the fights is a great addition.
Suggestions: i had some saving problems.... no biggy though. just look into it. Also some better background music would be nice.

Overall: I Love this Game It is like Playing Chess But fun I haven't yet purchased this game yet but I will since I have rented 3x from blockbuster.
Gameplay: There is no short story here long game play the fun of searching for member for your school.
If you really get into the story and play the game it is a lot of fun. Turn based at its best with slider bars and matching type min games to effect the blow dealt to victim.


Graphics: There is a lot here that is good and the characters are good looking as well but there are times that when a player or fighter dies they fall into the backgrounds or wall but that is not a big deal to me.
Sound: Sound was great for the type of game it was the cheer of the crowd the clank and ting of swords the music was good all match the game perfectly,voice acting was even pretty good.
Suggestions: Make Sequel with X BOX LIVE play that would be the BOMB